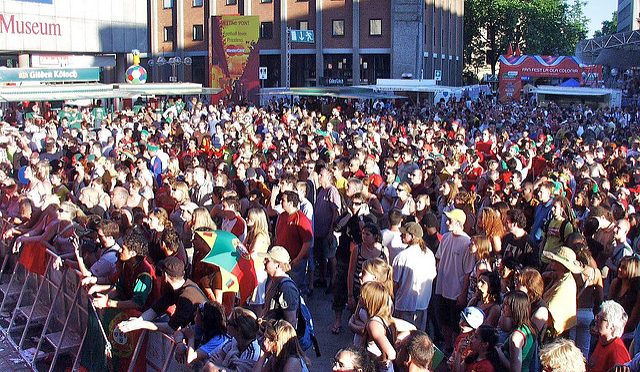 I would describe myself as sporty and easy-going hence, I always try to get along with the people around me. In my free time, I play soccer in a team, but I also like to do other sports. When I’m not playing soccer, I like watching it on TV. There are various competitions I enjoy watching and of course, there are a lot of teams and clubs competing with each other.

That’s where my topic I want to talk about in this blog, starts. There’s one team I especially like and support. I always try to watch their games and I basically know everything about this club. If somebody supported the same team, we would already have a lot to talk about with each other. Honestly, that doesn’t happen too often. But even if somebody supported another team or even a rival team, we would still have a lot to talk about. That’s the good side of it. It’s possible to create new friendships, because people meet to watch games together.

Unfortunately, there’s also a “bad” side. I’ve already heard about people that stopped talking to each other, or even started fighting because they supported rival clubs. That’s silly and I hate it when I hear about something like that.

I think that it’s great to be interested in sports and that there are a lot of friendships being created thanks to sports, but if you start fighting with someone else over a game that you didn’t even play yourself, it gets too far.

For example last month we had exchange students from Switzerland. First we didn’t know what to talk about. It was really awkward to sit next to each other in silence.  Later I realized that they like football to, so we started talking about football and soon became friends.