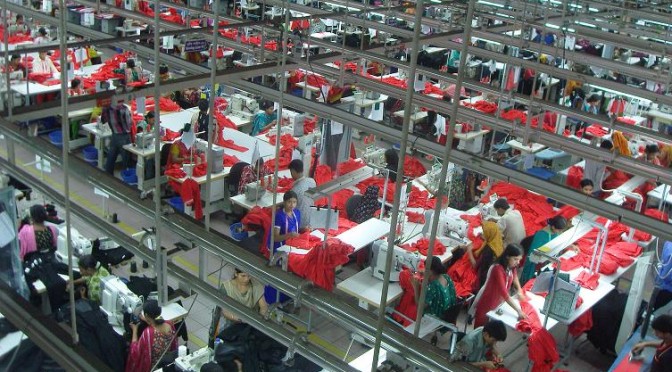 Have you ever thought about who produces your clothes?

We all know that most of the clothes we buy are produced in foreign countries. But why do companies produce their clothes in other countries? Firstly, the laws are different in foreign countries. For example, they have lower minimum wages, more working hours are possible and child labor is accepted. Even though the global brands are making millions in profit, the workers are not paid a living wage. In Asia, over 15 million people are employed in the garment industry. The majority of the world`s garment workers are women.

Every worker has the right to earn a living wage which means that they should not work longer than 48 hours per week. They should also be able to buy food for themselves and their families, pay rent, healthcare, clothing, transportation, education and they should have a small amount of savings.

What is it like to work in the garment industry?
The workers suffer from very poor working conditions. Also the workers’ health is negatively affected, for example, the workers are exposed to gasses or they suffer from far too long working hours. Their wages fall far short of a living wage, which makes it the lowest of all industry wages. They work under very dangerous and unsafe conditions. That’s why the garment industry has been hit by various industrial accidents.

In 2013 an eight story commercial building called Rana Plaza collapsed. When cracks in the walls were discovered, the shops and the bank located in the building were immediately closed. The workers of the clothing factory were ordered to return to work the next day. The building came crashing down, 1134 people were killed leaving thousands more injured.

High price brands, like Calvin Klein, produce their clothes in Poland or the Czech Republic, but “made in Europe” is no guarantee for good working conditions and fair wages. Including overtime working hours and bonuses, the average wage per month in the Czech Republic is € 417. In Poland it is even worse because workers are only paid € 315 per month. According to a Czech worker, supervisors tell them that they have to work overtime or else they won’t approve their request for holidays. (source)

Let`s act now
The Clean Clothes Campaign, an organization which was established in the Netherlands, is represented in 15 European countries including Austria. It has a partner network of 250 organizations around the world. This organization wants to improve the lives of garment industry workers. That`s why it is calling for clothing companies and brands to pay fair wages and to improve working conditions.

I think no one deserves to work under these conditions. I`m glad that there are organizations like the Clean Clothes campaign. You can sign petitions, donate to these organizations and be critical when buying clothes. I think it’s also very important to spread the word because a lot of people still don’t know under which conditions our clothes are produced. All together we can demand that the companies do the right thing.