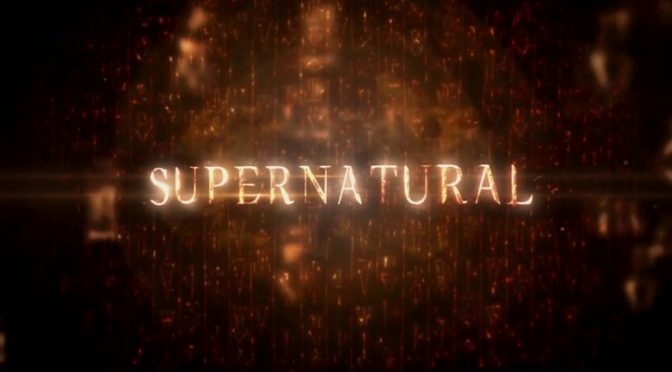 Hey everybody!
Today I would like to talk about something, that I am very surprised I haven’t written about before, since it is such a huge part of my life… ladies and gentlemen (and other creatures of sort) let me introduce you to “Supernatural” and if you don’t know what that is, how is that even possible?

Supernatural is a very popular TV-Series created by Eric Kripke and Robert Singer. Supernatural has just recently finished it’s 11th  season with a 95% Chance that there will be a 12th coming out next year. In Supernatural you will find anything that you can think of, from demons to vampires, to man-strabbing unicorns. It’s a series in which angels are hated and everybody loves Lucifer. They have created a world where God is a bisexual alcoholic and pexpletive never die. Well, they can die but they will never really stay dead for lone…it’s complicated.

Meet Sam and Dean Winchester, two brothers that grew up with a dad that basically forced them to kill monsters, altough they also get trained to fake FBI-badges, melt silver to make bullets, hack credit-carcs and many other quite useful skills. After their dad dies in the end of season 1 (or beginning of season 2 I’m not quite sure) the Winchesters tour around America killing monsters, takingrelaxing trips to heaven, hell and purgatory (those weren’t quite as relaxing), make friends with an angel, a vampire, the king of hell and some others. They even prevented the apocalypse back in 2012.

My favourite character used to be Samandriel, but then he died (for real) – the only angel that was actually “good”, besides Castiel maybe. Altough, now I really like Kevin Tran (I know he’s dead but still…), a 16 year old pRochester of the Lord. The  actor, Osric Chao, really embodies the pressured teen well.

I really love the series because it is very creative and features amazing characters, witty dialog and gory scents. If you have ever been on Tumblr chances are you’ve seen a spn (shortcut for Supernatural) gif or a comment about one of the characters even if the post has nothing to do with the series, which is hilarious when you stumble upon one (if you’re in the fandom, if not it is quite annoying I hear).

So yeah, I would definitely recommend to atleast start the series – I understand if it is too gory, but how will you know whether you like it or not if you don’t even try?