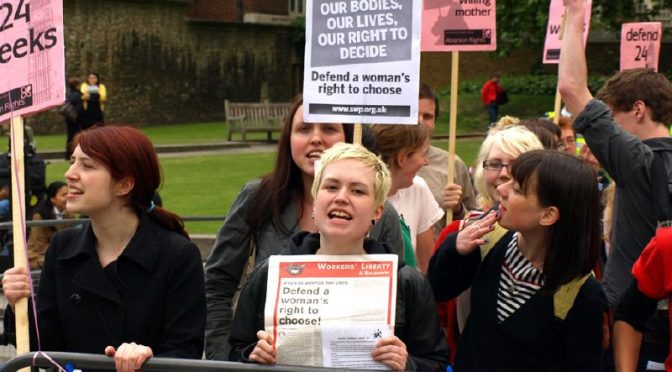 Have you ever come across the terms “pro-life” or “pro-choice”? If you have, chances are that you know about the huge controversy surrounding abortion. Abortion is the act of removing a fetus before it has the chance to become a baby. The controversy evolved around whether this should be considered murder and around the resulting question of whether it should be illegal or not.

People who are vehemently against abortion call themselves “pro-life”, seeing as they claim to save lives by stopping fetuses from being aborted. However, if you look at the situation of women who want to abort, I don’t see how it would help anybody to illegalize abortion. There are a few different situations a woman can be in that would possibly lead her to wish to abort her fetus. The pregnancy could have been a result of carelessness, an accident or an assault. In most cases she will not be in a situation where she could offer her child a good life. She might still be in school, in which case a baby would hinder her chance to have a good education, or she might not have the financial security a baby would need. Not to mention the possibility of a rape victim having to deal with the additional emotional trauma.

As to the question of whether it should be considered murder, a fetus is medically speaking not considered a human being until the central nervous system has developed, which happens around the sixth week of pregnancy. In Austria, it is legal to abort a fetus until the end of the sixth week, any later it is considered a felony.

If someone calls themselves pro-life, they should not only consider unborn life, but also, and more importantly the lives that already exist, like the one of the would be mother. They should rather ask for safe abortion clinics, because women might impair their own health by aborting on their own with tools such as clothes hangers or metal hooks which very obviously aren’t safe at all. Women have died trying to do something that should be their right, just because the government thinks it’s wrong.

In some countries such as Colombia there are not only no abortion clinics, but it is also illegal to even try and abort at home. It is only considered not a crime if it happens accidentally. There are even videos showing how to fall in just the right way and land on a fire hydrant to create a small chance that the fetus might abort although incuring a high chance of injuring yourself seriously.

You can help by supporting women who have had to or will go through any kind of abortion and by standing up for a woman’s right over her own body. Additionally, you can always support a safe abortion clinic by making a donation, seeing as almost all are extremely underfunded.