WHY YOU HAVE TO READ: THE DIARY OF ANNE FRANK

On Anne’s thirteenth birthday, her parents gave her a diary. She was very excited to have something where she could write down her secret thoughts. Even though she had a rich social life, she felt misunderstood by everyone she knew. So she started to write her diary to a imaginary girl named Kitty.

Anne Frank was born on 12 June 1929 in Frankfurt am Main, in Germany. She had an older sister called Margot. Because of Hitlers rise to power during this time, her family decided, just as many other German Jews, to leave Germany.

Then they settled to Amsterdam and found a home on the Merwedeplein. The children went to school, Otto (her father) worked hard and Edith looked after the home. On the 10th of May 1940 the Germans started their occupation of the 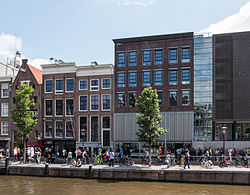 Netherlands and Anne’s family decided (July 6, 1942) to hide in an empty section of the building owned by Otto Frank’s company on Prinsengracht.

With the Frank family, there were four other people in the secret annex:

Peter Van Pels (He and Anne fell in love)

They remained in the annex for over two years. They always had to be very quiet and always lived in fear. The office workers in the building helped them a lot during their time there.

On the 4 August 1944 the eight people in hiding along with their helpers got arrested. They were deported first to the Westerbork transit camp, and then to Auschwitz. Otto Frank was the only one who survived the camps and so he published his daughters diary, like she had wanted to.

I read the book two times, because it was so good! The first time I read it, I was more emotional, because I didn’t know what exactly was going to happen. It’s really frustrating and horrifying to know what Jews and also others had to fear during the Nazi-regime. Nowadays, I think we can’t imagine living under those conditions.

So I think, especially younger people should read this book, because after reading it you really start to think and maybe you also realize what can happen if you don’t stand up for what you believe and for others. I also think it’s important that you’re always being critical.

The book is very sad, that’s true, but that’s reality and I think we should face it and know a lot about this time, so something like this will not happen again.