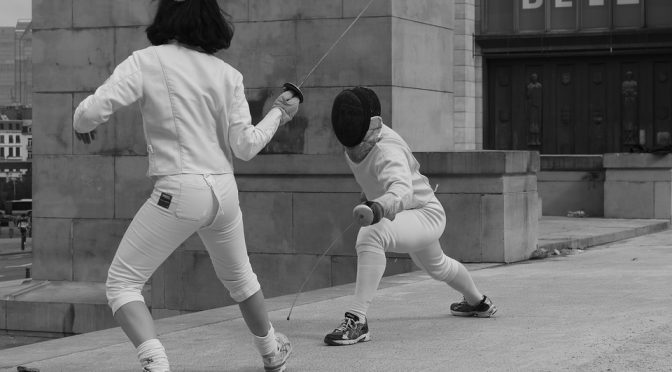 I’m going to write about the sport fencing because I have been doing fencing for nearly three years now. I know this isn’t long but I still want to tell you what fencing is all about because many people don’t know anything about the modern sport fencing. Fencing isn’t only the ancient way of solving problems or something you see in pirate movies. It is a sport and somehow it is even more than that. Fencing is about getting full control of your body and thinking strategically while reacting very fast. You not only get to know your opponent a lot but you get to know a lot about yourself as well. This sport helps me to get to know my strengths better and to realize how to use them.

Speaking about fencing in general: there are two types of fencing, individual fencing and team fencing. But the principle is always the same. A combat consists of two people, opponents fencing against each other. While fencing you must stay on the fencing piste, which is basically one line, so you are not allowed to change directions during a combat. You mostly fence with electricity that means that your weapon is connected to a score board with a wire so you can see if a person got hit because then it lights up. If you hit the fencing piste the hit isn’t displayed because of course it doesn’t count. Speaking again about the different types: individual fencing means that you got to score your own points for yourself. Depending on the and type of combat it is a victory if you score 4, 5, 10, 15 or more points by hitting the other person or you fence in a certain amount of time. Individual fencing is the type of fencing everybody thinks of first because fencing doesn’t seem to be a typical team sport. Well, actually this is correct, everything depends on the individual. Even the team fencing. Team fencing means that at least three people build a team. On the fencing piste everyone is again on his own, I think this is also one of the main aspects of fencing. You always have to face it alone, there is no one who can help you once you face your opponent on the fencing piste. But at team fencing, the team does matter. Let’s say there are two teams of three people that fence against each other. They have to score 45 points in order to get the victory for their team. Every one of each team fences against every one of the other team once. Two of them start and fence until one of them has won with 5 points. The next two must continue up to 10 points. That means if the person from your team lost with only 3 points before you would have to make another 7 points in order to win the next combat while the other person would only have to make 5 points. This continues up to 45 points.

There are often fencing tournaments. This could be a national championship or a tournament in order to get higher in the ranking of all fencers. Tournaments are held depending on the age of the participants, not depending on the amount of time you have been practicing fencing. This turned out to be a major problem for me at first because I started very late so I couldn’t quite keep up with others that were the same age because they had been training much longer.

There are three different weapons you can fence with. First the epee. It is the heaviest of the three weapons. With the epee, you only sting with the peak, you don’t hit with the blade. The whole body is the target area and if two people get a hit at the same time it counts for both.

Second there is the foil. It is the smallest and lightest of the three weapons. Like with the epee you only sting and don’t hit with the blade. Because the foil is more flexible and faster due to its lightness the target area is only the upper body without the head and the arms.

The third weapon is the sabre. Most probably it is the most iconic fencing weapon. It has about the same length as an epee but it has a different type of handling. With the sabre the hits also count with the blade so you don’t sting but rather hit like you would cut something. The target area is the whole upper body and if two people hit at the same time it doesn’t count.

Protection is very important for fencing because you could really get hurt if you get hit. Especially the protection of the face is very important. To protect your face, you wear a so-called mask, a thin metal grid through which you can see easily. Besides shoes, long socks that reach over your knees and a whole suit consisting of a jacket and pants that reach halfway down your legs there is another thin jacket for only one arm (the arm you are fencing with) called plastron. Women wear another chest protector underneath. Mostly everything you wear is in white color. The one hand that you are fencing with is covered with a glove. If you fence with electricity you have a cable underneath your jacket to connect your weapon with the score board.

I really enjoy fencing. If I made you curious try it out as well. It’s probably not suitable for everyone but it is actually more than just a sport once you’ve really gotten into it and it is a lot of fun for sure!