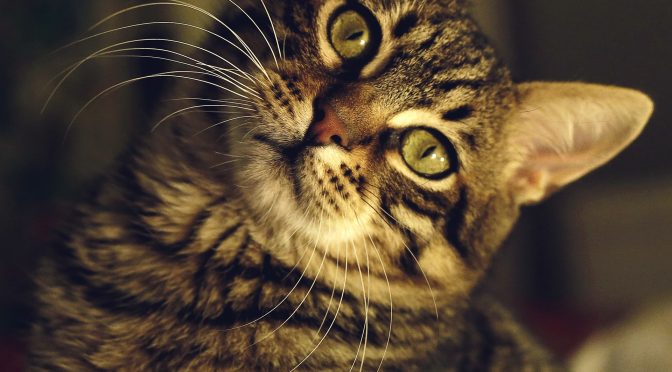 How Do Cats See Our World?

You have probably never wondered what it would be like to have a cat’s vision. What does a cat see when it stares out of the window? How, and why, does its world differ from ours? What do our surroundings look like from a cat’s point of view?

As you maybe know, cats have very impressive night vision. However, this does not mean they can see in complete darkness. If a cat was trapped in a room with no source of light, it too, wouldn’t see a thing. Of course, in everyday life, this is nearly never the case. Cats have much better vision than we do when there is little light available. This has a simple biological reason. We have 2 types of receptor cells in our retina (a part of the eye). Cones are sensitive to bright light and allow us to see in color, and rods are sensitive to dim light and allow us to see black and white. Cats have around 7 times more rod cells than we do, which naturally gives them the ability to detect light at much lower levels. This also gives cats the ability to sense motion at night, making them a dangerous predator for rodents. In other words, cats see their surroundings at night a lot brighter than we do.

Interestingly enough, humans have 10 times more cone cells than cats. Henceforth, it is not surprising that humans are able to detect motion 10 times better than cats, in bright light. Cats also have a different color spectrum, as these receptor cells allow us to see in color. Many people believe cats can’t see any colors, or only grey, which isn’t true. They can see shades of blue and green, as well as grey. However, cats aren’t able to see shades of red and pink, unlike us. Purple appears as a shade of blue, while red and pink seem greenish. Also, the colors cats see aren’t as bright, they simply don’t have the same richness of hues.

Another common question asked about cats is, why their eyes glow in the dark. Behind their retina, they have a structure called a tapetum, which is believed to act similar to a mirror. It reflects the light passing through the rods and cones, giving the receptor cells another chance to catch even the smallest amount of light. This, of course, greatly improves the cat’s night vision and also makes their eyes glow in the dark.

I hope, after reading this blog, you know a lot more about the visual sense of cats. Maybe the next time you come across a cat, stop and think about how it is seeing the world for a moment.