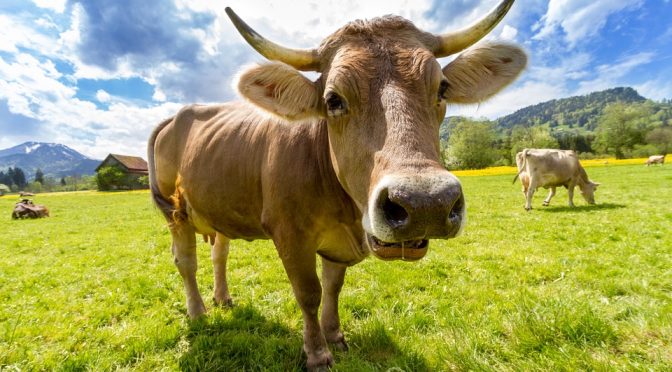 Like other female mammals cows only lactate when they are pregnant or when they have a new born to feed. So in order for the cows to keep producing milk, over and over again, the dairy industry impregnates the cows through a process called “artificial insemination”. This is a process where the farmers basically just collect the bull’s semen and insert it into the cow’s vagina, through a long tube, sometimes (actually always) on a so-called “raping-rack”. And to loosen that area a little bit, they forcibly insert their entire forearm into the cow’s anus.

And the horrifying fact is that by consuming dairy products, you are only supporting two terrible industries; (obviously) the dairy industry and the production of veal.

But what is done after the cow has given birth? Only moments after the calf was born, it is separated from its mother to prevent further emotional bonding, and because the calf would apparently start drinking the milk, which is for US! This causes the cows to go through an enormous amount of stress. Not only because she has been sexually assaulted and exploited all her life, but because she has lost her newborn. If it is a male, it is kept in a small container with limited moving options to avoid muscular growth, until they get transported to a slaughter house. But if it is a female, it gets fed with dozens of artificial hormones, to grow up in a ridiculous amount of time, so that it can become another dairy cow. Just like mommy!

The cow’s constant pregnancies often lead to premature ageing, exhaustion and mastitis, a dangerous but still very common condition in which cows’ udders inflame. This can often lead to blood and pus in dairy milk, and although most of it gets filtered out, there are laws in Europe that allow 400.000 somatic cells in one milliliter of diary milk. In the US even 750.000 cells are allowed and in Brazil, 1.000.000. But don’t worry, there’s a limit.

When a dairy cow’s productivity decreases and gets under average or when she collapses due to excessive labor, which often happens after 2-3 years, considering that a standard cow can live up to 25 years, she gets transported to a slaughter house and becomes the beef that you find in every supermarket.

Studies have shown that the hormones in milk, such as estrogen, often lead to breast cancer. And other studies have shown that the countries with the highest dairy consumption have the highest amount of bone fractures and osteoporosis. The human body actually is not made to digest dairy milk, only at some point during evolution our bodies had mutated to tolerate the lactose in milk. Quite a few people still cannot digest the lactose in milk, that’s the lactose intolerance. For instance, most of the Australian Aborigines, the Japanese and the Native Americans are lactose intolerant because it is not habit to drink milk in their ethnic groups during adulthood.

So why would you drink dairy milk if there are plenty of alternatives found in plants and if you actually do not depend on it? It just sounds weird to me that we are taking away the food from other animals when it isn’t even good for us.