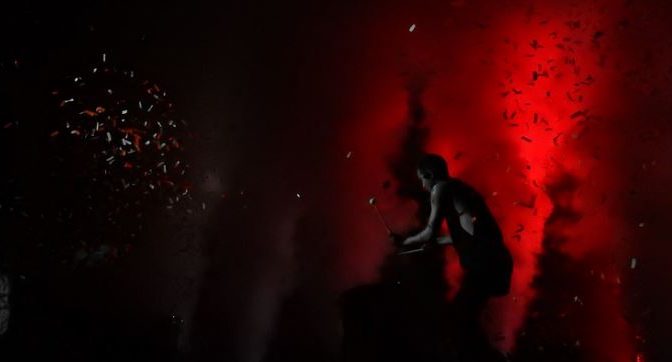 I visited my first concert this year in January. My friend bought me tickets for my favorite band ever “twenty one pilots”. I’ve never been this excited and I was so nervous that I put an “x” in my calendar every day I got closer to the concert.
When we finally arrived in Vienna, we took our black pants and our self-made merch-shirts and took the metro to Gasometer.

In the metro were a lot of fans dressed as the singers and it was amazing. We didn’t know exactly where the venue was, so it was convenient to follow the crowd.

We had to wait in a huge mass of people for about an hour, time passed away so slowly. But when we finally entered, we went right away to check in our jackets at the cloakroom. We had to spend one hour there waiting for a person to grab our jackets because of all the people. But you learn out of your mistakes and the next concert, we just took them into the hall.

We went there together with my friend’s cousin and her friend. When we entered the hall, there were so many people. Because we had lost so much time waiting for our jackets to be taken, we didn’t get that good of a spot. So my friend´s cousin and all of us went through the crowd to get a good spot.

I was quite nervous because everyone was yelling at us and I felt uncomfortable. Finally, we managed to get a good spot.

The lights had been out for over ten minutes and then the show began. The red light began to glow through the hall and the music started playing.

The moment the band started to play the first song, I nearly started to cry and my friend and I jumped around listening to the greatest songs EVER for more than one and a half hours. In one song, the singer Tyler Joseph, told the crowd to take the person next to them on their shoulders. So I took my friend on my shoulders and I was so full of adrenaline that I kept on jumping around even with her on my shoulders. Before the last song even began, my friend’s cousin had to leave because she felt sick. But when they played the last song, confetti was raining on the crowd in the band´s colors; red, blue and white and everybody was screaming as loud as they could. At the end I just heard a high pitched sound instead of all the screams.

This night I was just blown away by everything around me. I couldn’t stop smiling. And even weeks later, I was still smiling.

I would recommend everyone out there to visit a concert, but a concert of someone or of a band that you know and that you can jam to. Of course a concert is good even though you don’t know all the lyrics. But this was the greatest day of my life.

Next month my friend, my dad, my two brothers and I will go to listen to the same band again. This time it’s in the huge town hall. I am so excited only one month to go. I’ve been waiting to go to this concert since the day I left the first one.:)