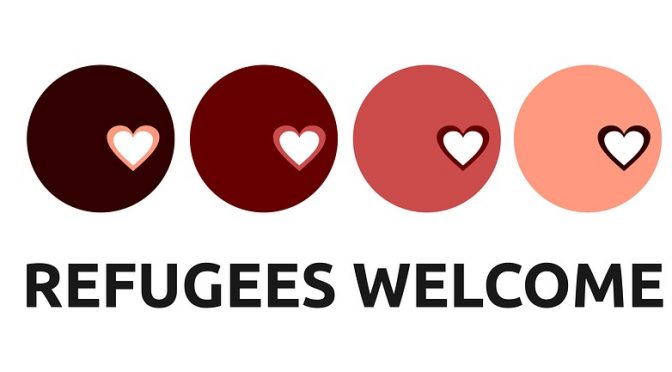 I think most of you know that in many societies there are problems with intolerance and racism. This is  a horrible thing because my opinion is that every single one of us is a human who has their own colour of skin, their own way they like to dress, the right to live and the right to be treated as everyone else.

Racism is a big issue at the moments, especially bcause of the refugee crisis in Europe. Yes, it is hard to have so many people coming to Europe at once, but imagine you and your family in their situation. You would also like another county to help you in such a situation. Those refugees come from countries where war is ongoing and their economies are terrible. They are terrified of getting killed or losing their families. Because of this they come to Europe, and I think the whole thing is harder for them than it is for us. It’s not a solution to send them back or close the borders, because our countries have enough space and enough money to handle the stream of people coming to them. We can manage.

In Austria the opinions split, just like in most of the European countries: there are the ones who think that every person should be allowed to live here and be accepted the way they are. Then there are those ones who don’t have anything to do but criticize people because of their origin or their colour of skin. They think that all Muslims are thieves, all people from Afghanistan are rich and only try to escape from their economic problems. Those stereotypes got into their minds because parties like the FPÖ are convincing them to think that way, by telling them that we don’t have enough space and money to feed all those mouths and give them a place to sleep. The FPÖ has slogans like “Love your near ones, those are the Austrians”. “Love your near ones” is the church’s slogan so it also relates to Christianity. Have you noticed that nuns are allowed to wear headscarves but Muslim women aren’t? Isn’t that strange? I mean either everybody is allowed to wear it or nobody. It’s unfair.  Christianity and Islam are both religions that should be accepted and judged equally.

I always try to tolerate different kinds of people. The only thing that I totally do not find okay are people who are intolerant of people from different countries, with another colour of skin and different religions and beliefs. Many people say, “They should stick to our rules.” On one hand that’s also true,  but don’t you think it’s hard for them? One should only expect something from others that he would do too. We are all of the same species, so why we don’t we all stick together? Just give people a smile and tolerate them the way they are. Love always wins.