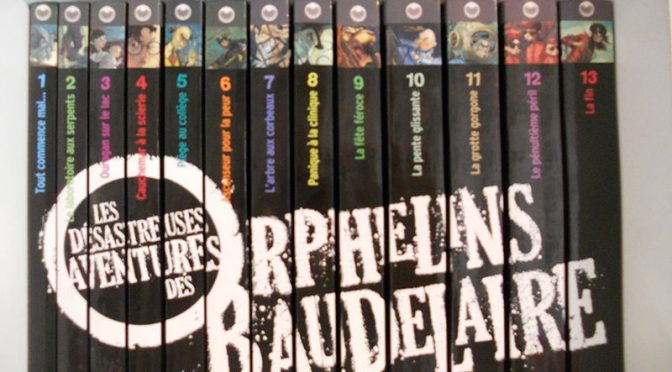 Pretend, for a moment, that you are an avid reader as many around you are. You’ve just finished the last 14000 word steampunk novella you’ve been reading for a week, and your stock of fresh DiscWorld books is slowly going dry. “Where?” you sob, clutching a pillow. “Oh, where will I find my next piece of Gothic literature with a healthy dose of dark humour?”

Well, fear not, dear reader, for I might have the answer to your oddly specific request: Lemony Snicket’s ‘A Series of Unfortunate Events’.

This series (spanning thirteen books in total) starts its story in a very standard way; the three Baudelaire siblings, Violet, Klaus, and Sunny, are walking along the beach. They’re having fun, skipping rocks, until they find out that they have lost their parents and most of their belongings in a terrible fire. They are then put in the custody of their (geographically) closest relative, Count Olaf (cue ominous music). Violet (the inventive oldest sibling), Klaus (the bookworm), and Sunny (the infant with…very sharp teeth) don’t take long to realize that Count Olaf isn’t really the coolest dude on the block. After a scheme involving trying to force Violet to marry him to get his hands on the Baudelaire fortune fails, the Baudelaire orphans are whisked away to a new relative. Excluding the marriage, that last sentence describes all the individual books of the first half of the series.

In all honest, although the series is officially filed under children’s literature, it’s overflowing with references to classic literature and poetry, ranging from outright quotation to more subtle ones, such as the name of the character ‘Esmé Squalor’, a reference to J.D. Salinger’s short story “For Esmé – with Love and Squalor”. If you don’t want to read a few thousand pages, you can also wait until the end of this year, when a mini-series based on the books will be available on Netflix! (This blogpost was not sponsored.)

Have a good time reading or watching this amazing series, and have a very fun day.