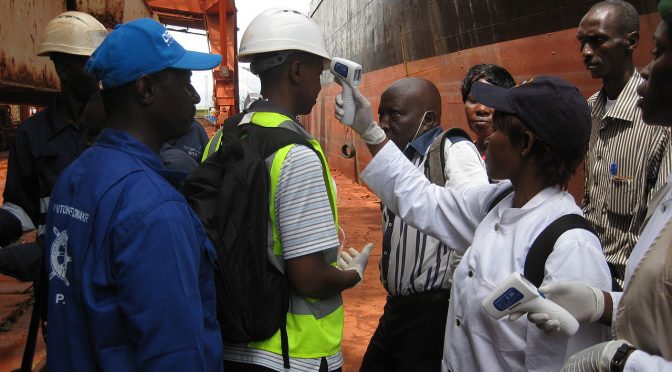 I think a lot of you have heard about the Ebola virus, but where does it come from, how is it transmitted and what effects does the illness have?

Ebola virus disease (EVD), also known as Ebola hemorrhagic fever, is a severe illness in humans and animals. It first appeared in 1976 in a region near to the Ebola River giving the disease its name. The biggest epidemic of Ebola started in the end of 2013 in West Africa, more precise in Guinea. From there it spread to Liberia, Sierra Leona, Mali, Nigeria and other West African countries. The epidemic was going on for over two years causing a high death toll of 11325.

What caused the epidemic and how is Ebola transmitted?
Investigators believe that a one year old boy was the index case of the epidemic beginning in 2013. In December 2013 he died of the illness. His sister, mother and grandmother were also suffering from the same symptoms and died as well.

It is thought that the virus is primarily transmitted through infected fruit bats. It is passed on to humans through close contact with body liquids of infected wild animals such as monkeys, antelopes, bats or gorillas. The virus also spreads through human transmission by contact with blood and other body fluids or areas stained with these liquids. Another cause for the virus to spread is sexual intercourse. The virus sometimes can still be found in the semen of men who have already been cured of the illness. Scientists also found out that a dead body can still be infectious for another 7 days. In the epidemic of Ebola from 2013 onwards 28657 suspected cases were registered. A fatality rate between 50 and 70 percent according to the area was measured.

What effects does Ebola have on the human body?
Sometimes it can be very difficult to distinguish Ebola from other infectious diseases such as malaria or meningitis. The symptoms occur between 2 to 21 days after the patient was infected by the virus. At the beginning the infected person starts to feel tired; fever and pain in the joints and in muscles are further first symptoms. Later symptoms are headache, nausea, abdominal pain, diarrhea, rash and vomiting. This causes the body to dehydrate which can lead to a hypovolemic shock (decrease of the blood volume). The most severe but also rare effect of the Ebola virus is the internal or external bleeding which causes a huge loss of blood and thereby is very dangerous for the human body.

Some survivors have experienced health problems caused by the so called Post-Ebola Syndrome. Some problems a doctor in Liberia has witnessed were headaches, chronic pain and sometimes an eye infection called uveitis. A physician in Sierra Leona reported that some survivors even went blind.

There is no proven vaccine for the Ebola virus yet but 2 potential ones are being tested. According to the WHO most survivors were healed by the use of intravenous therapy and constant measuring of blood values.

Organizations like the World Health Organization fight for a better health system in poorer countries and support them when help is needed. WHO is an agency of the United Nations (UN) which fights against infectious diseases all over the world, tries to encourage cheap health systems and informs local people. In Western Africa in particular they prevent epidemics of Ebola and support countries to make preparedness plans.

I think even though we Europeans are not directly affected by the Ebola virus and other infectious diseases we should inform ourselves about these horrible illnesses. I’m happy that organizations like the WHO are fighting for better health systems in poorer countries. Not only Ebola but also other diseases are very severe for those LEDCs (Less economically developed countries) or LDCs (least developed countries) and its very important to support them as good as we can.