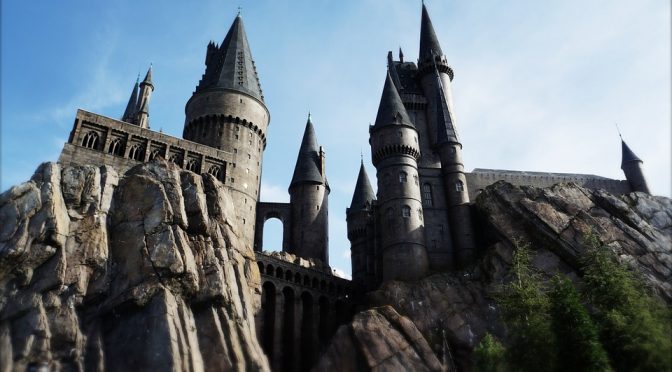 This is going to be a blog about Harry Potter, because that is a topic I know a lot about.

First a short summary: Harry Potter is a young boy, who grew up with the Dursleys, his aunt´s family who hate all sorts of abnormalities. On his 12th birthday a half-giant called Hagrid reveals that Harry has been accepted into the Hogwarts School for wizardry and witchcraft. He also tells him that the evil wizard Voldemort killed his parents, but when he tried to cast a spell on Harry as a baby the spell was deflected. After that Voldemort vanished.

During the seven years that Harry attends Hogwarts, he solves mysterious chess games, is attacked by spiders and living trees, survives Wizard tournaments and, the most difficult, he even passes his potions class. His two best friends Ron Weasly and Hermione Granger are always there to help him and make sure he isn´t blinded by his fame.

Important characters are: Professor Dumbledore, the headmaster of Hogwarts. Once, while looking into a mirror which showed his greatest wish, he was portrayed with a pair of warm woolen socks. Professor Snape is Harry´s potion teacher who always tries to convict Harry of some crime. Then there is Ginny Weasly the young sister of six older brothers.  But my favorite characters are Fred and George Weasly Ron´s brothers. They are twins and always make jokes and invent things like canary cream that turns the eater into a canary. It´s worth reading the books just to hear about their joke shop “Weasley´s wizard wheezes”.

I started reading the books, when I was about 8 years old. For whatever reason I didn´t read them in the correct order, probably because I usually took out books from the library, whatever was there at the time.  I still remember that the last one I read was the second one. Nothing could get me away from them. I only left my room for meals, while reading.  Usually I forget about them for some time and all of a sudden hear Harry Potter somewhere and start reading them again.

I enjoyed reading these books so much because they were full of excitement and fun and not boring, and they simply have a great story line or plot. And the references throughout the books are amazing. For example, the famous writer that interviews Harry during a wizard tournament (the goblet of fire) is already mentioned in the first one. These little things you only see, when you have already read the books a few times. J K Rowling invented a whole world and the same names keep coming up, even if they aren´t important  at all.

The thing I like most in these books is that the stories start with unsolvable problems and the little hints make sense only after you know the outcome.

I recommend this book to everyone who likes fantasy and good stories. They don´t get boring, and are fun to read. Honestly, these books are great!