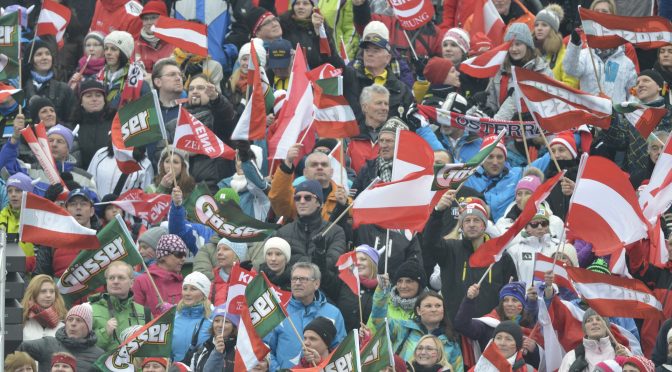 The FIS Ski World Cup races in Kitzbuehel are a huge event held every year. The famous “Streif“ is, by far, the most dangerous downhill of all. The legendary “Hahnenkamm“ races take place every year, in the end of January. For every athlete the Streif is the biggest event of the year.

The athletes face horrible crashes every year. During the last few years, the frequency of horrible hascrashes increased. In addition, the race last year was stopped after 30 athletes, because it was too dangerous. In the downhill race of 2016, three athletes, including the best downhill racer, crashed at the same spot of the course. The Austrian Georg Streitberger and the Norwegian Aksel Lund Svindal both tore their ACLs and menisci. Svindal was the best downhill racer of the season until he crashed. Moreover, Hannes Reichelt had a bone bruise. After they were wiped out at the Hausberg, the season was finished for all of them. The “Hausberg” is the last tricky section, before the racers cross the finish line.

Is the Streif too dangerous? Since 2008 there were 8 horrible crashes, and other crashes where the athletes hurt themselves tremendously. That means that the legendary Streif claims one victim every year, and sometimes more. Some skiers have ended their career after an ugly crash in Kitzbuehel., Daniel Albrecht for Switzerland and Austrian Hans Grugger. More than 5 years after their crashes, they are still not able to ski like they did before.

Kitzbuehel has become more of a promotion event than a usual event. It is still a race, but if pay attention to what is going on around you, you will soon see that there is a huge amount of advertising. There are so many sponsorship events going on next to the race. Furthermore, the FIS has it’s sponsors. There is obviously too much advertising. It is, by far the race with the most prize money for the winner. It is about 70.000 € for the winner and even 15th place gets money. Normally, only the3 best athletes earn prize money.

I have the impression that the racers are held at any weather conditions, because of the advertising and the parties going on around. The sponsors, TV channels and publicity want a race at any time and at any condition of the slope and weather. They don’t really care about the athletes` health.

In conclusion the ‘Hahnenkamm` races will have to focus more on the actual race and not on the parties and promotions next to it. The athletes should have more influence if something is too dangerous. I hope that there will be less crashes in the upcoming events.