Today, I want to talk about the topic „bullying” because I think it is a very important one and I want you all to understand what problems it can cause and I want to motivate you to fight against this enormous problem.

I´m pretty sure that all of you know what bullying is, so I think there is no need to explain it. I for myself experienced a lot of bullying in primary school. Until now I still don´t know why I was bullied. After two years I decided to change school. In the new school everything went fine for me, I was even popular and I had a lot of friends. I was not the one who got bullied anymore, but there was this other girl called Selina who had to go through hell. As stupid as I was, I did not even try to help her or to be friends with her, no I was one of the bullies. I knew what it felt like to bullied, what pain and struggle it is but I was afraid that it could happen to me again so I followed the crowd. Now I regret what I did, I really do! My message after all these experiences is to treat people the way you want to be treated yourself.

Bullying can destroy a person – emotionally and physically. It can cause mental illnesses; it can also cause people to hurt themselves or to even commit suicide. Do you really want to be responsible for a person´s death? For you it might seem funny, but for the victim it is a nightmare. During the time I was bullied I felt lonely, scared, disgusting and after some time I was beginning to believe what the others said about me. They told me that the world would be better without me, and unfortunately I began to think the same about myself.

If you know someone who is being bullied, step out of the crowd and be brave. Fight for them! Try to stop it! You could be the one who saved someone! For the person, you could be the hero!

I hope that you will think about what I said. I wish you a wonderful week. 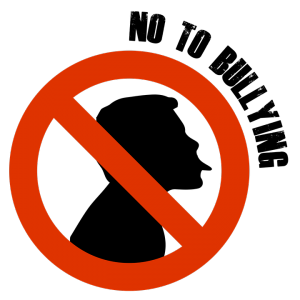