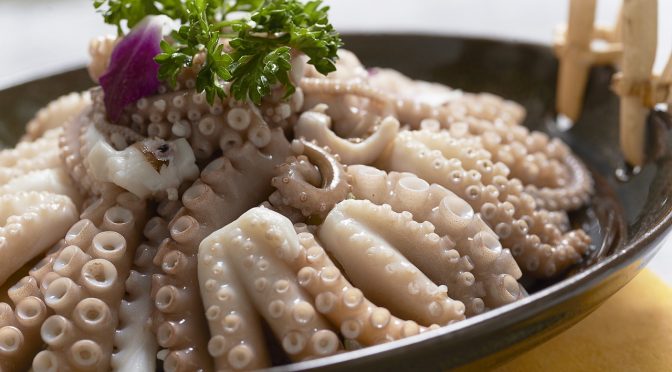 Doesn´t look like much but have you ever asked yourself what this animal was like when it was alive? I´m going to prove to you how cool octopuses really are:

Octopuses (Octopi or Octopodes) are probably some of the most remarkable animals on earth. It is well known that octopuses have four pairs of arms although they have neither an internal, nor an external skeleton. This means that they have no bones or a shell, which is the reason why they can squeeze themselves through very tight and small places. Still their tentacles break when they are damaged. Another extraordinary thing about them is that they have blue blood and three hearts: two for pumping the blood through each of their two gills, one for pumping blood through the rest of their body. But the structure of their body isn´t the only impressive thing the octopus is offering.

Octopuses are unexpectedly intelligent animals. They can store both, short- and long-term memories. Also you can teach an octopus behaviour but they usually don´t learn from their parents because they wouldn´t live long enough. And although octopuses are colour-blind they can adjust to their surrounding perfectly in a few seconds, just like chameleons. This can be used as a defence mechanism or a tactic to attack their prey.

Octopuses can change their bodies in many different ways. They can for example create bumps, spikes and ripples to disguise as stones or different kinds of water plants. They can also, just like mentioned before, change their colour within a few seconds, depending on their surroundings. After they are almost invisible, even for human eyes that can distinguish different colours. Sometimes octopuses also use their memories and knowledge to camouflage themselves. For example they pretend to be a poisonous snake by hiding all their arms under their body, with just two arms floating around like a dangerous water snake.

But the changing of their body shape isn´t the only defence mechanism that protects an octopus. They use the substance that they are known for to distract their attacker. They use their ink as a last possibility to confuse their enemy before hiding away. But the ink also contains an amino acid which is called taurine which most of the predators are attracted to. So instead of keeping on hunting the octopus, they stick with the ink. Aren´t these animals incredible?

If you want to find out more about octopuses or animals in general, I´d really like to recommend you this youtube channel: 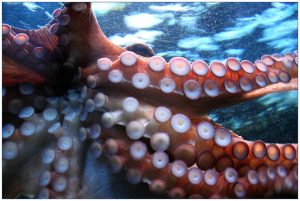