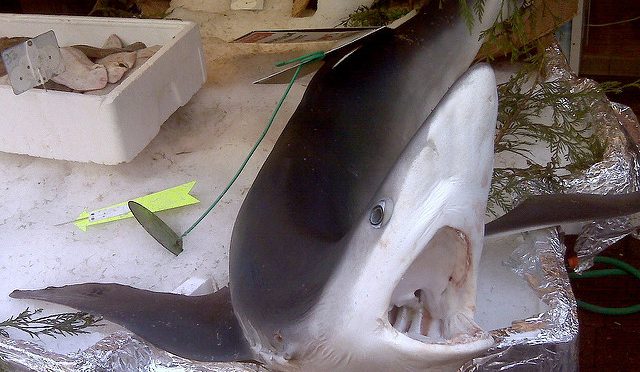 Over the summer I read a lot about all the fish living in the oceans, especially about sharks. They are such interesting creatures, and when I read that humans just kill them off one by one, I was utterly devastated. So when my teacher proposed the idea of writing about something I wanted to tell people all around the world, I decided this was one of the main topics I wanted to write about.

Humans have done so many evil things over the centuries. We all know that. There have been so many species extinct, or facing the threat of extinction. I could write millions of pages, use the most extravagant words, and I would not be able to come even close to describing all the horrors our planet and its nonhuman inhabitants must go through.

Almost everywhere there is a huge but still growing demand for products that come from the sharks. One huge problem is the production of shark fin soup. Most of the time the fishermen just cut the fins off and throw the rest of the body, the trunk, back into the water. Most sharks cannot get oxygen from the water if they are not constantly moving, so they drown miserably. Those who can breathe, die from hunger.

Asia has the biggest demand for shark meat, most of all from the huge whale shark, about 50 percent of all shark meat is fished and eaten in Asia. In Germany the meat is known as ‘Schillerlocken’, in Britain it is used in Fish & Chips. Of course the producers wouldn’t name their product ‘brutally taken shark fins’, like in Britain and Germany the meat is sold under different names, for example: Smoked Rock Salmon, Smoked Dogfish, Imitation crab meat, Tofu shark,… The list goes on.

Of course, not all sharks are killed for their fins, but also for nutritional supplements. Sharks do not have an air bladder, instead they have an oil-filled liver. The humans see this as a great opportunity to use the rest of the body too, but they do not use the body the fishermen pull out of the water for their fins, no they fish perfectly healthy sharks for this use. The skins of sharks are also used for bags and other things, the rest of the body is used for make-up. What they don’t use they throw away.

Other dangers are shark nets, or nets for usual fish, in which sharks become entangled. They also die in the so-called ‘bycatch’. Fishermen target fish like tuna or something similar, and they accidently trap the shark in their net, killing them. The overfishing of the seas is also a problem. By exhausting the products the oceans supplies us with, the sharks also have less to eat. Sharks are also hunted and fished for sport or just as a trophy.

In the last 40 years the number of sharks has been decreased by 90 percent. Honestly, more people are killed by coconuts than by sharks. A few years ago the excuse to kill sharks was: They are monsters and kill humans, therefore they must be killed. Every year around 73 million sharks are killed by humans, while around six humans were killed by sharks, and still most people fear and hate them with passion, while fishermen only see them as a valuable commodity that they can sell.

Besides the threat of extinction, killing all sharks is extremely dangerous and endangers the balance in our oceans. Also, killing sharks is like killing foxes. They are the cleaners of their territory, they eat the carcasses others have left behind.

Sharks don’t lay very many eggs, it is possible they will be extinct in the near future, if we don’t do something about it. Please do not eat their meat and don’t look away. If we continue like this, we will probably destroy the whole planet.

If you want to know more about that topic, here are some links: